Why a pail of water doesn’t dry easily

Compressor or refrigerant dehumidifiers, which work by absorbing water vapour from the air, are not effective below 45% relative humidity (RH).  A desiccant, or absorption, dehumidifier continues to work to around 25% RH, drying more gradually at the lower vapour pressure. There is always a degree of heat energy involved, but more can be added.

Adding heat will excite the water molecules and make them travel to the surface faster.  Some traditional lumber dryers use compressor dehumidifiers and heating elements in order to get a lower relative humidity and therefore lower vapour pressure.

Using too much heat or drying too quickly may mean the timber or a wall  becomes “case-hardened”, meaning the outer skin becomes impervious to the flow of moisture through it. In wood this can sometimes not be reversed, but when dealing with masonry, removing heat or dehumidification can allow the plaster to “relax” so that drying can be re-started.

Build yourself a drying cabinet and put a dehumidifier inside. Then fill a pail or tray with water, switch on the dehumidifier and observe.  What you probably expect should happen does not, in fact, occur.

The water should disappear quickly right?

The pail of water test seems like a logical and simple way to show the performance of a dehumidifier in a tight space, but it doesn’t work as expected.

The same example was demonstrated by an experienced restoration figure who had been in the industry for more than 30 years and said: “I’ve put a refrigerant dehumidifier in a bathroom of a flooded house. The bathtub was full of water. I managed to dry the whole house in time but the bath tub was still full of water”. When asked why this was, he said simply: “No idea”.

The more humid the air is immediately above the water, the longer it will take to evaporate. That’s because if the air above the surface is already filled with water in the form of vapour it is unable to hold any more. This is what we mean by vapour pressure.

What you see in the test

Even though the Ecor Pro desiccant dehumidifier can achieve a lower humidity level than a larger refrigerant dehumidifiers and dries faster, that doesn’t explain why the water in the pail does not disappear.

Evaporation of the water molecules from the pail is also impacted by temperature. Water evaporates more quickly at higher temperatures to give a higher flow rate between its liquid and gaseous (vapour) states.  Molecules of water in the pail are in constant motion in random directions.  Since only a small proportion of the molecules are located near the surface of the pail and moving in the right direction to escape the surface at any given time, the rate of evaporation is limited.

As the faster-moving molecules escape and break away from the cohesive bonds of their neighbours and, indeed, from the majority of the liquid, those remaining molecules have lower average energy and the temperature of the liquid drops. In other words, once the energetic molecules of water with enough energy to leave do so, turning into vapour, there is an overall loss of energy in the pail. This ‘evaporative cooling’ slows the process of evaporation. It’s the same with human sweat. When sweat evaporates, we cool down.

The impact on drying a wall for flood restoration

As with human sweat, when a wall or timber is drying, the heat energy at the surface drops as the water evaporates.

Any heat being used to promote drying needs to go through the dry area at the surface of the wall to reach the moisture deeper in the wall, and travels faster through the damp wall than the dry wall. Using too much heat can lead to the material drying too rapidly. If the surface is too dry, the heat will find it difficult to get through to the moisture deeper in the wall. This can in effect seal moisture in  completely and, with certain substances, particularly woods, damage them permanently. At the same time, the denser dry surface area can form a barrier that moisture finds harder to cross.

For this reason, care must be take to dry any substance at the correct rate, avoiding the possibility of causing damage by too-rapid drying.

In some instances it may be necessary to stop the drying process to allow the wall or other substance to relax. This allows moisture to travel from the deeper, damper areas of the wall to the drier surface so that drying can start again. Once moisture has reached the surface, the drying process can resume.

The correct way to dry any medium is to apply enough heat or drying energy at a rate that moisture can travel through the substance naturally. Dense objects need to be dried more slowly than less dense items.

Going back to our pail, it is more difficult to give the water enough energy to promote vapourisation as it is constantly moving because of convection currents.

How much does surface tension affect vapourisation?

With the exception of mercury, water has the highest surface tension of any liquid because of the hydrogen bonds between water molecules. This is why they can hold themselves together in a drop and why you can fill a glass of water to just above the rim without it spilling.

Air movement will aid drying.  Heat or dehumidification will dry the immediate area, but that will mean the room as a whole will not have air at the same level of dryness. This can be achieved by circulating the air with additional fans. A car windscreen we will see clearing even when the engine is cold and there is no heat. This is because the air closest to the cold windshield is more saturated and eventually sits on the windshield as condensation. Putting even a cold fan on distributes the saturated air more evenly so the windshield begins to clear.

To evaporate a pail of water, you need to break the surface tension to allow the water molecules to escape with heat.  To quicken the evaporation process, circulate the air if needed and reduce the vapour pressure in the chamber by using an Ecor Pro desiccant dehumidifier to create a low relative humidity.

In the flood drying and restoration industry, it may not be possible to add heat to the environment, or there may be concerns about heat damage to items inside the property,  In that instance the other variables still hold.  Reduce the relative humidity in the property with an Ecor Pro desiccant dehumidifiers and circulate air if needed. 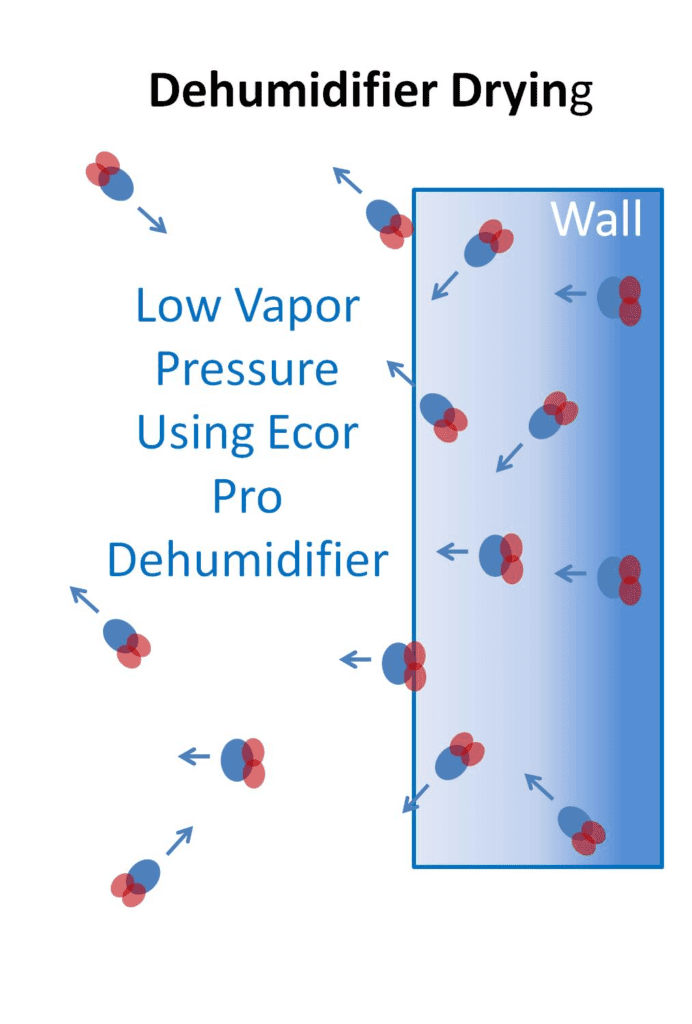 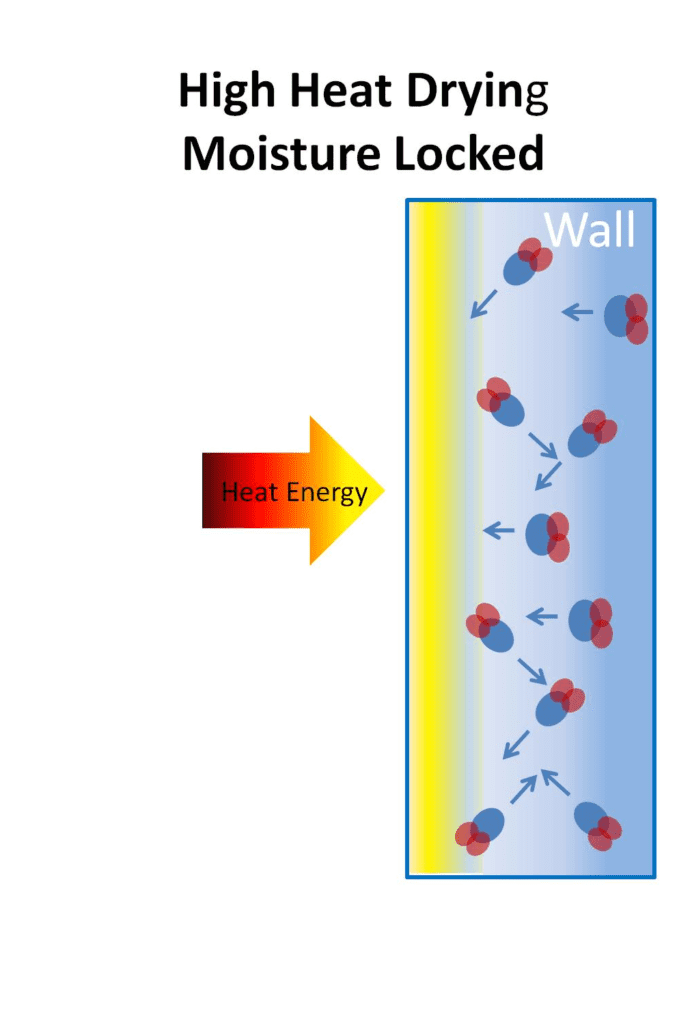 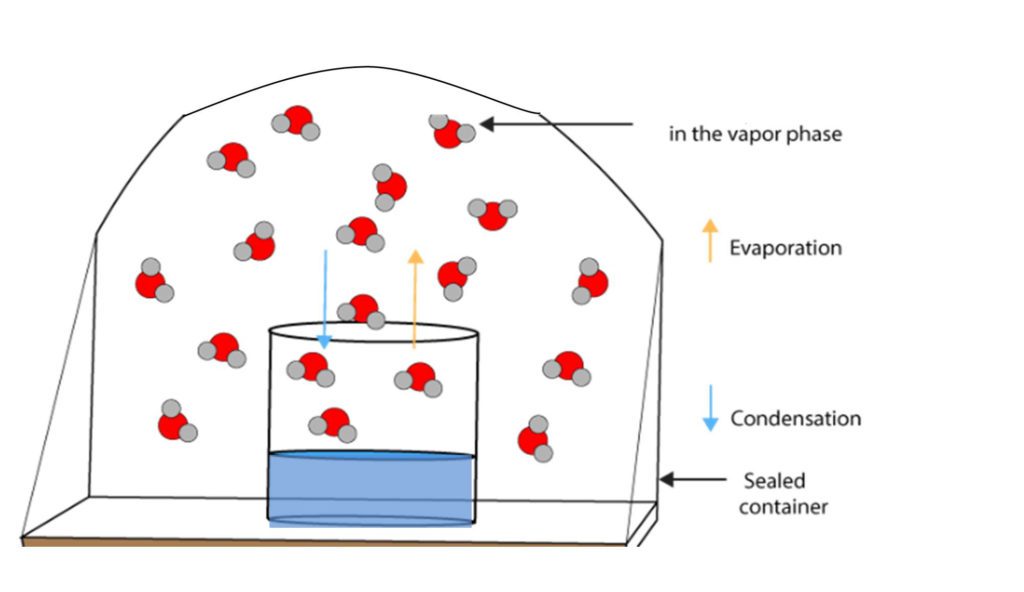 Breaking surface tension is difficult without heat.  The easiest way to achieve it in the context of our pail of water test is to empty the pail of water onto a medium in which the inter-molecular forces have less of an effect. A sponge-like material, brick, plaster or even drywall itself is enough to break the surface tension.