Protect your car & Contents with a garage dehumidifier

Above 55% RH, rust will form on tools, belongings or on the car itself

Garages are often unheated. Between October and March in the Northern hemisphere with low temperature moisture forms on cold surface.

Moisture is in the air but if a snow-covered car is driven into the garage, the humidity in the garages rises massively.

NOT JUST FOR COLDER CLIMATES

A garage acts just the same as a cool cave so has excess humidity that needs to be kept under control before it causes costly damage.

FOR Commercial Garages TOO

You may need more than one unit or a larger unit from our range.  Check out the EPD200 for the USA market or DH3500 in Europe. Tough, highly effective absorption dehumidifiers.

The car hotel needed to protect luxury cars they have under their care from their prestigious clients.  Luxury sports cars and classic cars all loved by their owners.  Older cars are particular vulnerable to rust but even modern cars need protection from excess humidity to keep them in pristine condition. Rust forms in a relative humidity (RH) of only 55%.

The Car Hotel had two options to keep humidity low.  Maintain the garage at a higher temperature than the outside or dehumidify.

Warehouse heaters were less expensive to initially purchase. However, their energy consumption is high whether heating by gas or certainly electric.   The door would not be left open only open a few times per day for clients enjoying their vehicles.

Dehumidifying would prove most cost effective solution in the medium and long term.   The next issue was the average ambient temperature. A decision was made to use some heating to allow a comfortable environment for clients and staff but it would still be on average around 15°C/59°F but there would be situations where there was no heating on in the The Car Hotel at all.

With no heating there would be a possibility of ice forming if condensate dehumidification was used and also there was the convenience of ducting the air rather than emptying condensate.

One option offered by a competitor to Ecor Pro was to use one large dehumidifier and duct dry air around the building.  The Ecor Pro was to use several DH3500 units (EPD200) placed around the building each monitoring the local air humidity.  That meant a) Several units were more reliable than one. b) air was driven around the area to help prevent dry air spots c) Our solution was cheaper.  Ducting is expensive to install and takes up more volume and it is surprising to most that one large dehumidifier itself is often more expensive than several smaller dehumidifiers with the equivalent extraction capacity.

The humidity though took some time to reduce.  Concrete flooring retained a lot of moisture and thee was an obvious problem “When the wind blows the humidity goes up.”  It was obvious, that although The Car Hotel is a relatively new building, it still was leaking air.  No need to put the DH3500/EPD200 in “4 hole mode” as even by sealing the holes with expanding foam there was enough regen air for the dehumidifier.  Not many buildings are air tight.

the right unit for YOUR home GARAGE

Suitable for three car garage.  With this model you will need an EPHUM220 humidistat.

Garages Can Be Any Size

Often keepsakes stored in garages have even more sentimental value.  All items are subject to mold or rust from excess humidity problems.

Protect valuables with the right dehumidifier. 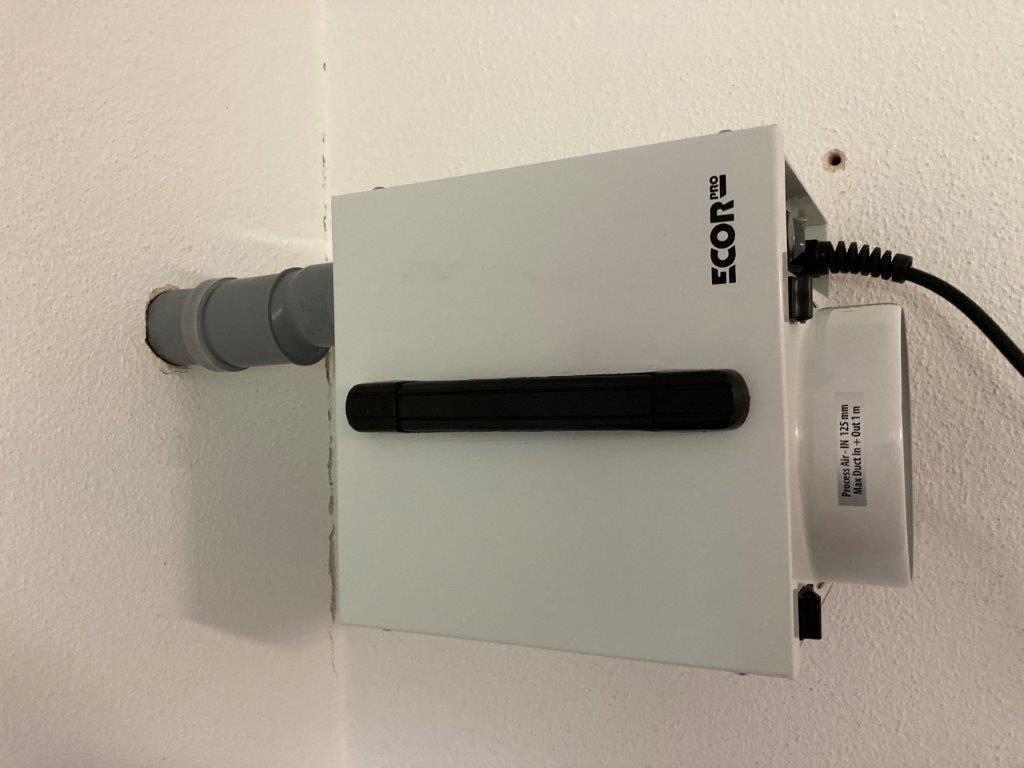 Exhausting air against a wall

Ensure also the Garage is Sealed

If the wind blows and the garage is leaking air, then all the air the dehumidifier has dried will be replaced with damp air from outside.  Use expanding foam to seal holes.  Consider better fittings around garage doors of expanding panels that seal the garage door from drafts.

if you need more help?